Tony Elumelu on The Platform

One of the highpoints of my participation at the 2016 World Economic Forum on Africa, Kigali, Rwanda, was this exclusive conversation I had with one of Africa’s richest men, Tony O. Elumelu, who is also building the next generation of champions on the African continent.


Tony is an economist by training, a visionary entrepreneur and a philanthropist. He is the Chairman of Heirs Holdings, the United Bank for Africa, Transcorp and founder of The Tony Elumelu Foundation. Elumelu holds the Nigerian national honours, the Commander of the Order of Nigeria (CON) and Member of the Order of the Federal Republic (MFR). In 2011, New African magazine listed him as one of the 100 most influential people in Africa, and a year later, he was recognised as one of "Africa's 20 Most Powerful People in 2012" by Forbes Magazine.


He told me about the Tony Elumelu Entrepreneurship Programme (TEEP), and his passion to support young entrepreneurs and startups in Africa.

Listen or download the full conversation on The Platform Podcast or read a summarized transcript below.

ThankGod: TEEP is a commendable venture with a very different approach from other ventures in Africa. It is an excellent program and unprecedented in the history of entrepreneurship in Africa.What are the actual measures in place to ensure the project is Sustainable for the future African Generation?

Tony: Basically the nature of the Tony Elumelu Entrepreneurship Program (TEEP), I set aside One Hundred Million US Dollars every year and invite 10 thousand young Africans who are interested in entrepreneurship. Every year we choose a thousand. 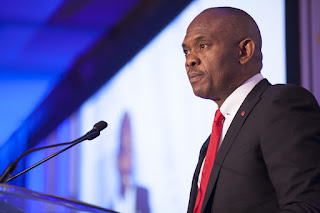 We advertise they apply and get Acensure to help screen their applications and recommend to us, we choose a thousand from the list, it is sector agnostic; it is open to all Africans on the continent, once we select them we train them for twelve weeks online training and after the twelve weeks training we have a bootcamp and at the end of it we give you the first seed capital of five thousand dollar which is non refundable.

Then you start and later if we see that your on course and doing well we give the second fund which is refundable, the first capital is not refundable but the second one is refundable. I believe what entrepreneurs need is not fund what they need is capital.

How do we ensure its sustainability, because I'm a business person I know that there must be a timeline to every business plan, that's the reason we said ten years, at the end of ten years we access the success of these entrepreneurs and to know whether to continue or stop with them.

ThankGod: The $100 million dollar TEEP program supports and promotes entrepreneurship across Africa and was intended to help 10,000 budding African entreprenuers to develop their ideas into Sustainable businesses. How do you directly benefit into tapping into the young Africans by funding their projects and making half of the money returnable?

Tony: The first five thousand we give to these qualified entrepreneurs is like prove of concept, to prove their business idea and they must know that it is not grants other wise you don't want to breed laziness. What they need is capital and if you want to make sure the project is sustainable and that they themselves will not lay back, they need to know I took money and I have to pay back the money, but the good thing about the Tony Elumelu Entrepreneurship Program, is not like banks where you ask for collateral and all that, this is not a loan program.

What African entrepreneurs need, is the right business environment, they have ideas, they have seed capitals to prove their ideas and they have mentorship support.


ThankGod: What inspired you to start the Tony Elumelu Entrepreneurship Programme?

Tony: Today what we call demographic boom can become demographic doom if we don't do something about youth economic engagement. We have a lot of young people in the continent, we must make sure that they are actively engaged, job opportunities in our continent is lacking we need entrepreneurs to create jobs, small and medium scale enterprises actual help countries to deal with the issue of employment generation, that has not been the case in our continent.


This interview was conducted by ThankGod Okorisha, All rights reserved, 15th May, 2016.
Posted by Unknown at 01:25

Email ThisBlogThis!Share to TwitterShare to FacebookShare to Pinterest
Labels: the platform, Tony Elumelu