Dan D' Humorous on The Platform 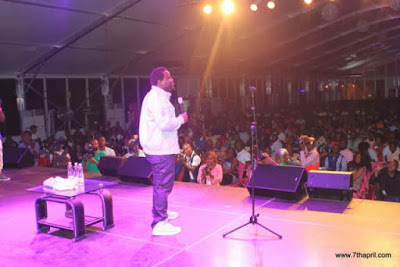 Daniel Chibuzor Nwoka, popularly known as Dan D' Humorous, is an ace Comedian, Social activist and also a member of the renowned group, Funky 4 Plus One.  Daniel organizes one of the biggest comedy shows in Nigeria, The One Man Show.

He steps on The Platform and we discussed his journey so far in the entertainment industry and his upcoming event titled THE KING AND I (The Epic Meet). Enjoy!

ThankGod: You are undoubtedly one of the biggest entertainers to emerge from the Niger Delta, tell us how it began?

Daniel: Thank you for the compliment, well we are still work in progress. It all began way back in my growing years, I had always had this love for entertainment and later on as I grew older this love grew into a passion and at a point I just knew that it had to be entertainment or nothing.

So I began discovering myself trying my hands in music, dance, comedy, theater and the likes. Turns out the comic part was manifesting itself the most, so I began to harness and enhance that side of me and here we are... work still in progress

ThankGod: What and who would you say has influenced you so far as a Comedian?

Daniel: Life has Influenced me heavily; the things I see everyday and the experiences I encounter, as my life unfolds I get inspired and Influenced.

I have also been influenced by a lot of my senior colleagues both locally and internationally, my family, my heroes and mentors. The list is endless

ThankGod: In 2014 you organised The Renaissance Summit, what was the vision behind the submit?

ThankGod: There was so much hype in the media about you contesting in the 2015 general elections, do you nurse any political ambition in the future?

Daniel: Well.. the future is bright, lets keep walking in it and see what it has in store for us, but my political passion is still alive.

ThankGod: How best do you think comedy as an art can be used to correct the ills of the society?

Daniel: Because of what we do,we command a certain kind of attention, so we as practitioners can leverage on that and pass across relevant messages to correct societal ills using our art form, as people tend to grasp more when in a relaxed state

ThankGod: You're one of the very few comedians from Nigeria to have performed outside Nigeria, can you share some of the stages you've featured on?

Daniel: I've done numerous events abroad, private and public, but most significant is the Montreux Comedy Festival in Switzerland, Crack Ya Ribs and The Lords of the Ribs both in England, The Nigerian Entertainment Awards in New York, Ghana Meets Naija in Dallas, and Charter House Comedy Show in Accra, etc. 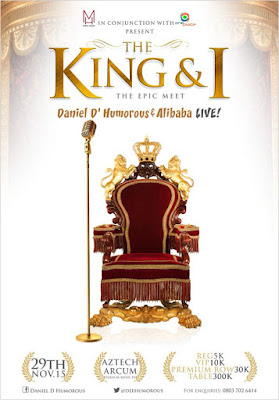 ThankGod: Tell us about your personal shows like, The Altar Call and The One Man Show. When is the next edition coming up and what should we expect?

Daniel: The next one is even bigger; It's more than a comedy show. If you've enjoyed the One Man Shows before now, then consider this, It's "THE KING and I" with me and ALI BABA; the original king of comedy in Nigeria.

ThankGod: Thanks for coming on The Platform, Daniel, it was a pleasure speaking with you.

Daniel: Thank you for having me.

This interview was conducted by ThankGod Okorisha, All rights reserved, 28th October, 2015.
Posted by Unknown at 05:10